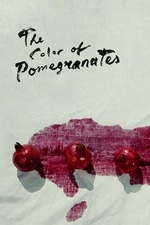 This film is art.

The Color of Pomegranates is an autobiography film of Sayat-Nova pseudonym of Aruthin Sayadian, a poet born in a family of dyeer and educated by the Armenian Church. Throughout his life, he author many songs and poems and became a poet at he Royal Court of Tbilisi and the Royal Court of Telavi in Eastern Georgia, and is known as King of Song. He became priest after the death of his wife and lived at Hagpat Monastery until he was killed by a Persian warrior during the war between Agha Mohammed Khan and Armenia.

This film does not present someone's autobiography like a normal movie but presents it like a poem and art, but being a moving picture using the same technique as a silent film which conveys words by the use of the title cards in which each title card will represent a moment in Sayat-Nova's life, such as Childhood, Youth, Prince's Court, The Monastery, The Dream, The Angel of Death, Death.

And the outstanding part of this movie is that each scene has symbolism and it's very abstract, which takes a lot of skills to criticize and find the meaning of each thing. Which if we know a basic symbolism, it'll help a lot watching this movie, such as, sheep represents innocent people, black represents death, undress represents absoltion and pomegranate juice represents flesh and blood of Armenian. If you can understand film language and symbolism in this film, it definitely will increase your impression of this film.

Besides the film language suggested by Griffith and Eisenstein, the world of cinema has not discovered anything revolutionarily new until The Color of Pomegranates. Paradjanov made films not about how things are, but how they would have been had he been God.

He invented his own cinematic style, which was totally out of step with the guiding principles of socialist realism (the only sanctioned art style in the USSR). This, combined with his controversial lifestyle and behaviour, led Soviet cinema authorities to repeatedly persecute and imprison him and suppress his films.