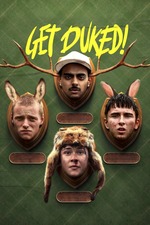 This is why I didn't do the Duke of Edinburgh award.

I thought this was a really fun comedy. It comes very much from that Wright/Waititi camp of having this strong stylistic edge and deadpan humour, which can sometimes totally come across as lame, but in this case it works pretty well for the most part. It's pretty consistently funny and doesn't try to take itself seriously at all, which is to its benefit.
The director has done a lot of music videos, which really shows in the visuals and editing of the movie, plus there's a pretty A+ tier soundtrack.

It's just a really fun, clever comedy thriller that manages to be silly and over the top, while still having a message about teamwork and class/generation warfare. And it's just pretty nice seeing more Scottish movies, set in Scotland, by Scottish directors. 🏴󠁧󠁢󠁳󠁣󠁴󠁿