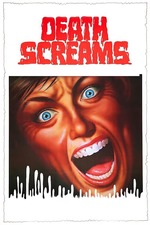 The above are the last few lines of dialogue, which might explain how you could feel after watching this one.

One of the strangest and vaguest 1980’s (although it looks more late 70s) low-budget slasher films I’ve ever witnessed. Not that there’s anything surreal and to tell the truth it’s a very run-of-the-mill fare. It’s more got to do with how everything pans out. Nothing seems all that connected and scenes/actions are very random and plain loopy. At best very unconventional in its story threads.

After the obligatory opening death, the thirst three quarters slowly plays focal point to small town atmospherics, carnival traditions and teen dramas/or fooling around. As if it was trying for character development and mystery building with its numerous characters. However the latter doesn’t work with an incoherent script. Like it was trying for a “Halloween” vibe, especially in how it was shot. Early on it has the killer in the background slowly stalking the victims. The attempts of building suspense from those moments were lacking. While the music score sounding like a grandstand band was just overkill. There’s one or two more death scenes sprinkled throughout to remind that you are watching a slasher film. One of those needs to be seen to be believed, because of how bizarre and stupidly it plays out.

But it really doesn’t come into its own until the confined hysteria-laced backend, as the teens (although they do look much older) start partying; boozing, skinny-dipping, making out by a lake late at night then moving onto a cemetery to tell spooky stories. This is when the FX and dismemberment of the cast begins to occur. Sadly some of it happens off-screen, but there are unpleasant moments or two with mild, but charming low-rent make-up effects involving machete hacking and a head explosion. I just wished the carnival setting could have been put to better use.

We only get to see the killer’s arm and machete throughout, until the final reveal. I don’t think it’s hard to guess the killer, but the motive behind it is told through a bogus flashback before meeting their own demise. The sheriff character on the scene is a lot more switched on then you would expect… although he sure does take his time on this particular investigation and stumble across many things. Although he does show he’s a shoot first, ask questions later guy. You know playing it safe, as if he’s watched too many horror films. I thought the cast was acceptable for such an outing. Susan Kiger made an agreeable heroine of sorts and Jennifer Chase added some life with her floozy character.

“Death Screams” aka “The House of Death” is a passably oddball, if at the same time unimaginative rough-around-the-edges slasher.