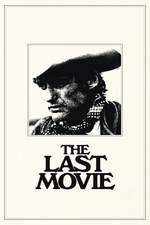 THE DEATH OF THE MARLBORO MAN: THE AMERICAN DREAM REVISITED

On the surface level, this film portrays a group of villagers using fake film equipment to perform actual violence they learned from the westerns being shot in their country, along with wacky editing and Dennis Hooper milling around the land. In actual terms, this is only somewhat true.

The start of this movie is put in place to set up the horror that develops within the mind of Dennis throughout the film. We see from the start the fetishization of the people and the land through ritual masks to his "exotic" girlfriend he uses and abuses throughout the film. This theme of rape and Americanization of land is oozing throughout this film. Dennis is using the land as a fantasy island cutting harshly to him the American cowboy charging his horse of another in a dream-like matter almost making you forget he is doing it on someone else land he is a parody of himself he is a parody of the westerns he makes. Dennis Hooper is doing the same for what Brando did when he denied oscar for the godfather he is pointing out our mistreatment of native people in the film industry this time with his aim on the Spanish as he saw horrors like this first hand on set before. Dennis makes us question a few things here how far is too far for escapism and is it right to force our American fuck you attitude on those who don’t know better? This American attitude can also be seen in the whore house scene as the rich white people guac over two foreign women fucking or how his girlfriend mentions how she wants American objects like a “General Electric Refrigerator”.On top of all of this Dennis adds the element of a goldmine that he and his buddy want to ransack knowing nothing about gold stealing it from a foreign land in an American dream-like fashion.

Though this film is messy in the way it tells its story especially its focus more on Dennis white privilege arc I think it’s necessary for a film like this. The middle is there to show how disrespectful Americans can and be how they live in a “This is mine because I say it is” mindset. Only when Dennis abandons this goldmine dream at the end he can see through the bullshit and see the horror through the trouble the film industry has done to the village. He is now stuck in haze forced to be a stuntman for eternity. To be treated as an object like they treated the villagers.