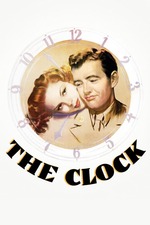 A soldier, "green as grass," looks for a light in Penn Station, and then for a way out. "Well, you go up," offers a man from Jersey, but the endless verticality of the skyscrapers intimidates, so a horizontal connection—a broken heel—is needed for the escape. And so the film moves, as rhythmic as a musical, tracing arrivals and departures, ups and downs, crisscrossing all the way: the camera tracks across a restaurant, and later descends a spiral staircase; a lighter sits in one hand, the phone in another; a soldier's "pick-up" becomes another's let-down. But all the while, there's something amiss: three sneezes instead of the clockwork two; a busted tire followed by a busted eye; children frightened by the sight of a soldier. And the film itself feels genuinely strange, halting and hesitant, almost uninvolving, with the interplay between Walker and Garland an odd mix of passionate and perfunctory, perpetually on either side of romantic bliss. "If people thought about all the things that could happen, they'd never do anything," offers a married milkman. But on cue, the spectre of war intercedes, the lovers separated by the thronging crush of the subway, with only frustrated assistance ("No English") and barely missed connections to line the way. The frighteningly intense mid-staircase reunion flows into a scattered, bureaucratic scramble—a whirlwind without the romance—that practically transforms Minnelli's New York into a Kafkaesque purgatory, not unlike the Marseille of Anna Segher's WWII novel Transit.* ("Who does he think he is, Hitler?") An "ugly" marriage ceremony is drowned out by passing trains, but the quietude of a closing church provides the pair some solace, with the motions of a candle snuffer tracing one final descent. The morning after observes a ritual silence—not to mention a perfect cup of coffee—until it's back to the throng of Penn Station: all vertical barriers and departing trains. In the final shot, the camera floats away above the crowd, and seems to offer some release. But as Christian Marclay's gargantuan, endlessly-looped update suggests: There's no escaping time.

* Highly recommended, esp. for fans of The Castle; read in anticipation of Petzold's adaptation.