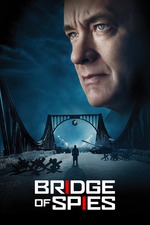 "Write the story, take out all the good lines, and see if it still works.”

Ernest Hemingway said that. I first read that quote the day I saw this movie and this movie basically proved it's point.

Bridge of Spies has a lot of great directorial flourishes by Spielberg. A suspenseful opening chase scene, a sequence that demonstrates the horror of East Germany, a couple great American speeches, what's not to like?

The problem is that the narrative is stretched thin throughout. There is a deep bond between Hanks's lawyer and Rylance's spy, so why aren't there more scenes of them together? Negotiating a hostage exchange sounds like a difficult task, then why does it seem to go so simply? Sure, there are complications, but they don't permanently change the game.

This movie tries to tell two different stories. The first is a courtroom drama, the second an Iron Curtain thriller. Neither is given enough time to be fleshed out. Though there is brilliance in each, both ended up letting me down.

Maybe Spielberg can make up this missed opportunity by doing a sequel. The "where are they now?" section stated that James Donovan negotiated the release of 10,000 people out of Cuba when he was sent to negotiate the release of a tenth that many. I'd love to see Spielberg and Hanks do a movie like that! Only with a tighter script.