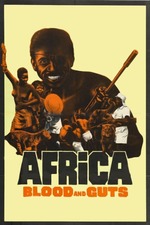 Before I talk about the Africa Addio, I need to point at the elephant in the room: Boy, this documentary is racist. It's presents Africans as people who need to be tamed by a more noble race. To a viewer who knows very little about the subject, one could see colonization as more of a humanitarian effort then exploitation.

I gave this documentary a high rating because it contains some of the most shocking and informative footage around about freshly independent Africa. In Tanzania, an actual genocide is seen from the air. The same plane is then shot at by roaming rebels as the production crews begs the pilot to fly closer. The team took deadly risks that payed off, granted, the footage was used for exploitation.

My favorite moment is when the documentary is the most dishonest. After showing the violence in the failing Tanzanian state, the film transitions to South Africa. It's a beautiful white beach with white women in bikinis and white men surfing. The narration compares and contrasts how wonderful South Africa is. "See, doesn't this look like a better place?!". It's pretty obvious what they are implying. White societies are better then anything that the Africans could construct. Of course, they ignore that the beach was under Apartheid rules and that the wealth gap in the country was staggering. Wow, a ruling white class is enjoying life more then the destitute Africans across the road! Shocking!

Africa Addio is mondo trash that further pushes the narrative that European exploitation was actually a force for good. You should still watch it though, the footage is one of a kind.