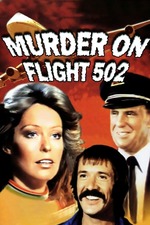 Knows it has to make good on its title but also knows it's gotta fill that timeslot, so throws in all manner of misdirection in the form of capital-D Drama. Is the person who left the threatening note in the first-class lounge the drunken mystery writer? Could it be the middle-aged man who vibrates with anger every time he sees the faded rock star who's taken the same flight? Is it maybe the shifty goateed pile of sweat that has daggers in his eyes for the old doctor on board? Or maybe the European Cool Guy who the mystery writer thinks might have helped pull off a heist several years prior?

You see what I mean. In between all that, plus other character beats (like the chatty old Jewish woman trying to befriend the nice, quiet elderly man seated next to her), plus Robert Stack gruffly barking orders and taking zero guff from anyone, plus the ground crew frantically trying to figure out what's going on before anyone actually does get killed... this talks itself into a frenzy of suspicion and mean glances. Corny as a Nebraska farm, yet intensely satisfying in its low-expectations way. The precise form of the film Airplane! was mocking, and no less enjoyable for it.