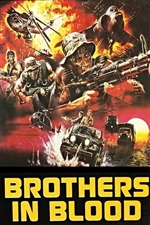 If there's anything interesting about this film, it's in the intrinsic nature of Italian genre knockoffs to expose the bones of whatever they're knocking off. This is a 'Nam film that works more or less as a discount Missing in Action, with Bo Svenson, never more disengaged, getting his old war buddies back together to go rescue a man they left behind. The genre's a fundamentally conservative one anyway, built around the insistence that we could have won if only we'd let Our Boys off the leash, and refighting the war by rescuing our forgotten POWs is a good and proper way to regain our lost confidence ... so it's fascinating to see how hard this one works to out-conservative its American inspirations by, for instance, dragging in a homophobic plot thread about one of the ex-soldiers being held as a sex slave by a seedy Thai (?) pimp and forced to perform drag shows under threat of sodomy. And then it ultimately horseshoes even harder than First Blood Part II - where Stallone, having symbolically won the war, can finally be allowed to vent his fury at the bureaucrats and government lackeys whose dehumanized bean-countery led to all this unnecessary suffering and death, this has its opening moment of split-second rationalized sacrifice be the fuse that lights the exact powder keg of terrorism Svenson and Co. ultimately find themselves fighting in the nowadays. It's a warped and ugly reshaping of an already-ugly genre, a funhouse mirror cutting through to the truth of a national myth being made from stuff and nonsense.

And, like any typical funhouse mirror, it's fun to look at and consider for about thirty seconds, then I start to wonder why I'm standing here staring at this squashed and distorted thing when I could be riding the Tilt-a-Whirl.