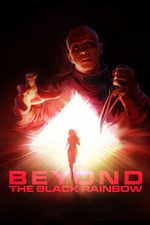 Beyond the Black Rainbow

Rather than a proper review, I'd like to address something I've been seeing a lot vis-a-vis this here movie. In other words, I'm about to break this shit down real small.

Great visual experience, but oh that ending! That seems to be a standard knock on Panos Cosmatos's sumptuous, thrilling sensory blast Beyond the Black Rainbow, to where even its champions feel like apologizing the last fifteen away. Nuts to that. Its ending is terrific, a sudden disorienting gearshift that only seems outside a piece if you don't look at it all that hard.

There's a number of reviews of that cite the director's statement wherein he dubs the film as a childhood imagining, a reconstructed idea of the material locked within the lurid VHS covers of the R-rated films he was forbidden to watch as a child. That's a neat attention-getting sentiment, but it also feels reductive - Rainbow is too deliberately thought-out, both in its specific references and its thematics, to be sui generis. What I see here is a thorough and meticulous piece of engaged genre criticism, and the ending is key to that.

To understand what I'm talking about, let's look at the film's timeline, how it relates to the directorial style and what it means in light of the film's primary visual fetish. Beyond the Black Rainbow is crafted in a stilted, airless, immaculate style that recalls early Cronenberg (Crimes of the Future in particular), Kubrick and THX 1138. By copping this odd, intellectualized style that fit within the uncertainty of the '70s and nowhere else, Cosmatos is openly trafficking in a dead mode of creation.

But the kicker is that it's not just dead for OUR time - it's also already dead for the subjects of the film. Rainbow, despite all indicators, is pointedly set not in the mid-'70s but in the go-go Reagan year of 1983, a time in which said cerebral mode of genre filmmaking had been more or less kicked out the door by the more immediately visceral thrills of high-incident blockbuster space operas and the splattery substitute orgasms of the slasher film. The setting is hermetic not just as a stylistic choice but by design; the Arboria Institute is pointedly a bulwark against time, sealed off by '60s acid-casualty idealists and kept in a hushed institutional sameness where anything unique or dangerous is drugged into submission and the sterile, overbright lighting intends to both daze and drain. (Imagine being trapped in a modern office cube farm for twenty years, living with nothing but pale tube lights and recycled air.) This is a film that reaches back in a barbed way and uses the trend towards genre catalogue-plundering as a tool against itself and those like it, a work in which the time is deliberately out of joint and even its most imposing soldiers are revealed late in the film to be blank-eyed children with no will of their own; in that light, the truest and most important part of the director's statement isn't the VHS-cover thing but the final line: "It’s a nostalgic movie, but it’s a poisoned nostalgia."

So we have nostalgia set against its typical purpose. What can we do with that? Well, note then that the main visual and psychological motif is that of division, of a body at war with itself. Reflections and mirror images abound in Cosmatos's vision. Dr. Nyle is kept secluded from his star patient Elena via a one-way mirror. His halting interactions with his wife are marked by his confinement to one side of the screen, a hefty load-bearing beam splitting the space in two. Even the the title screen is bifurcated. The dueling psychologies of the leads are similarly split - Elena is being kept from her more powerful aspects via drugs and quack psychotherapy, while Nyle is literally denying his true sociopathic self (revealed in an astonishing and disturbing pure-cinema flashback) using the power of a bad toupee and a shit-pile of barely suppressed rage.

This is all about to tie together, but before that... Back to Elena. As we quickly learn, she has incredible psychic/telekinetic abilities. This is what's being kept from her, but evolution will find its own way out. A pissy moment of pique from Dr. Nyle against a too-nosy nurse proves to his ultimate undoing, as it provides her with both her first taste of her true power and her first yearning towards something better than her lab-rat life. The death of the nurse sees Cosmatos going apeshit with the stylistic tics, all quick editing and fluttering frame rates and screaming dark crimson on a blank white-cushioned canvas, but that works into the film's favor in a way. When Elena unleashes her true self, it's not just an assault against a person - she forces the very fabric of the film to bend to her enraged will. Hold onto that.

Still holding? Good. So. The end. In short, Elena escapes the Institute and breaks into the real world of 1983, pursued by the around-the-bend Dr. Nyle, now sporting an emaciated hairless look that could harken back to either the homicidal drug zombies of Blue Sunshine or the cadaverous mutant Jason Voorhees that we meet at the end of the original Friday the 13th. At which point we unexpectedly cut to two drunken rednecks shooting the shit in the middle of the woods. This, I think, is where the film loses most of its viewers (the ones who hadn't already rejected it, anyway). It's a ballsy gambit, a leap into the void that asks you to take on faith that the director knows what he's doing here.

But, add up what we know. We have a film consciously working in a moribund register, with a heroine who can affect the texture of the film if she chooses and division on its mind. So yes, take all that and understand that what we have is a bifurcated film, only one that chooses to conceal its schism until the last possible moment. Those rednecks are intentional slasher archetypes, a genre from 1983 and one the film previous had been trying so hard to ignore. But when you break into the now, you have to engage with the now; what we have here is no less than the heroine of the film defeating the antagonist by literally forcing the genre to change in accordance with then-modern style. And then it dizzyingly uses that capitulance as its own motivation to move the fuck past that new dead end.

If the jump into slasher territory is unsatisfying, I suggest that it's because the slasher genre itself is inherently unsatisfying in the way that a post-orgasmic chill fades long enough for the shame of an unsuitable partner to roll in. And if the film ended at the middle-finger deus ex rockina (thanks, Sam), I'd understand the disenchantment. But it pushes further, to that shot of Elena running towards the lit-up houses, towards civilization, towards something new and exciting and endless. The message, for me, is clear: Nostalgia is all fun and games for a while, but ultimately you've got nothing but a handful of wank if you don't try to move forward. Fuck the past, chase the future. Looking back, mining the past, is useful only in what you can learn to blaze new trails. Keep running towards those houses and don't stop, don't ever stop, until you find your own way out.