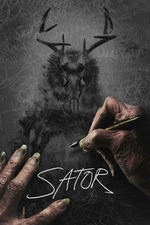 some real quiet, slow deep woods psych-occult shit right here, count me in. the visuals and sounds are entrancing. and the moments in nature- the forest, the mountains, the sky - are captured with such care and fused with the created world in a way that summons a lingering mood.

the only place this fell a bit short for me was with some of the dialogue; I didn’t mind the plot being murky, I’m actually down for that, but there were a few conversations that felt a little too forced in focus and tone. I feel that might be part of why this could be less accessible than others of the genre. I think the character development isn’t on the same level, and the entity is emphasized so much that we don’t learn all too much about the characters otherwise.

all this to say, I am just so genuinely impressed with what Graham accomplished. the time, energy, and heart that went into making this. it likely increased my appreciation to know the backstory. glad to have checked it out.