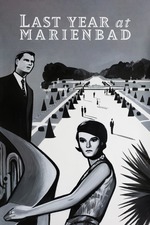 A sublime non-liner piece of cinematic obsession that fragments what we know as storytelling.

An ornate hotel becomes the focus of the lens, spectacular, sprawling and wonderfully symmetrical its repetition aligns with the narrators seemingly reset lines seamlessly. Unnamed characters in a world of perhaps and could have, dream-like and non-linear, endings replay according to whims and it is not clear what is fantastical and what is memory. Time is an important factor here, characters freeze, timelines are blurred and broken, conversations forgotten. The female character (Delphine Seyrig) is shot in a silent-horror style, exaggerated motions and make-up, wonderfully costumed in structured Chanel designed outfits, black and white used to crisp perfection.

The influence on The Shining is clear as cameras track along endless corridors and the hotel becomes almost an imposing character of its own. The string score at times overwhelms the narrator, particularly when events are not unfolding to his positive recollections and adds to the unease felt on viewing.

Capable of being read in a multitude of ways, could this be the male recollection of a supposed sign of interest? A place for unfinished deeds in the afterlife? A fractured memory? The director leaves the viewer to conclude. Bold avant-garde cinema.