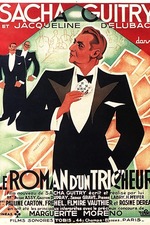 The Story of a Cheat

Don't show this movie to people who're starting to appreciate film and have learnt the Hitchcock "show-don't-tell" rule. Once that rule has been assimilated enough to admit exceptions to it, Le Roman d'un Tricheur might serve as a proof of the image power to go beyond storytelling: if that role is left to a voice over, then what's seen, far from being redundant, gets richer in details (gestures, glances, light) that are free to exist by themselves without the duty of narration.

This delightful story about people with an astonishing ability to let go without being too attached to anything creates a particular world in which luck rules everything (not only in Monaco), even moral. It manages to set a tone which is sassy but not entirely cynical (take, for instance, the encounter with the one-armed saviour).

Spoken language and visual mise-en-scène find their ways to be witty and amusing. "She looked 25, but she was 24", or "That night I was my wife's lover", or the succesive revolving door entries in different impersonations are all good examples. It's as if literature and film shared a sense of playfulness, like a grandmother and her granddaughter playing and having fun together.