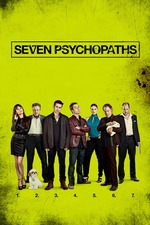 Such a fresh addition to the genre of 'Martin McDonagh being Martin McDonagh' that I almost forgot my initial astonishment at how a modern comedy-satire could actually manage to be this effortlessly witty and just all-around loved by a modern film cynic like me. The 'movie in a movie' aspect immediately won me over and so did the seven quirky psychos, four of whom were played by the most 'unpredictable geniuses' of today's meager supply of quality actors and who blessed me with absolutely off-the-rocker performances: Sam Rockwell, Christopher Walken, Woody Harrelson and Tom Waits. Add to the mix an alcoholic Colin Farrell losing his shit because of all the wackos surrounding him and McDonagh's razor-sharp witticisms and batshit crazy dialogues and you've got yourself your Friday-night merriment with lost dogs, the Jack o' Diamonds, screenplays, slit throats, bourbons, deserts, burning cars, bloody corpses, flare guns, western-type shootouts and psychopaths in all abundance. Yummy.