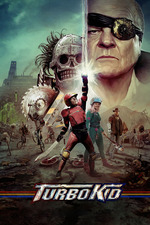 A midnight movie in almost every way, Turbo Kid is a film that feels like one those from childhood amped up with tons and tons of blood. The acting may not be that great(although I did dig Michael Ironside as the villain), simple set design and insane looking wardrobe decisions that made the post apocalyptic world seem like run of the mill fare, the story ideas seem too over the top at times and wacky performances from a bunch of unknowns,the film is just so much fun that none of this will really matter. I saw it in a theater full of people and everyone was just having so much fun with this film.
Not a perfect film, but a fun throwback film that brings the blood in a big way. Enjoy this a bunch of your friends and you won't be disappointed.
9/10 for entertainment value, but more like 4.5/10 for film merit. Lets say 6/10 overall.
6/10