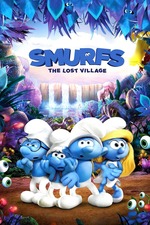 A reboot (of sorts) for the franchise, going all animation this time, really
helped with the narrative of the film. Smurfs The Lost Village follows four main Smurfs, Smurfette(Demi Lovoto), Hefty Smurf(Joe Manganiello), Brainy Smurf(Danny Pudi) and Clumsy Smurf(Jack McBrayer) as they search for the Lost Village while avoiding the dreaded Gargamel(Rainn Wilson). The story is a very basic journey film but the actors are able to make the journey somewhat interesting with a fun dynamic that they share with each other even if the dynamic between Hefty and Smurfette is that Hefty thinks she's hot.
The film however relies on silly jokes, simplistic story plot points and an ending that tried to pull on heart strings but ultimately didn't hold any weight. A lot of this is due to the fact that it is aimed mostly at young children and while the animation looks great and feels like it fits as an updated version of the old television series(as opposed to the previous movies that are just so off-putting in that world) but its just going for the ridiculousness of the jokes and not really making this engaging for all audiences.
My Take:Take your kids for a fun enjoyable time for them, but don't expect to get too much out of this.
3/10