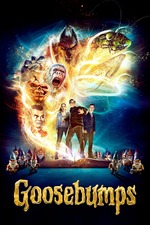 Jack Black plays a more subdued version of himself in the character of R. L. Stein, the creator of the Goosebumps, whose creations are real and get released by a new neighbor on a fateful night and must be captured again in a wild horror like story that seemed great for families in the halloween season.
The film has this great light hearted feel to it, Jack Black is funny without having to go into the over the top kind of comedy he is normally known for and the kids that act along with Black, Odeya Rush,Dylan Minnette and Ryan Lee, and they actually work really well with Black's comedy style. Amy Ryan is also good in her small time onscreen as a mother of one of the main children as well as Halston Sage who gets a small onscreen presence as a love interest.
The special effects were hit and miss for me as some looked really well executed and then some of the monsters(Abominable Snowman and the Wolfman looking really off) while other creatures like Slappy the Dummy (blend of CGI and a practical doll) look really good and it felt like the right call to make the mastermind(and lead villain) of the opposition.
A fan of the books when I was a kid, it was a whole lot of fun to see the creatures coming to life onscreen, but will also be a film audiences can come fresh into without knowing anything about the franchise.
Good family movie for the season and a fun film experience.
7/10