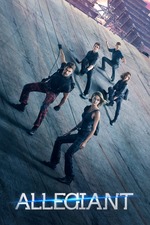 Yet another YA dystopian film series based on a book series that decided to break up the final book into two movies and while some of them have been from good series(Harry Potter), some very successful (Hunger Games) and others quite terrible(Twilight), one is sure: the first film of the two-parter is basically just a hold-over for the series and therefore is just not compelling as a film that tells a complete story.
Shailene Woodley as Tris in this movie is just walking through the motions with the emotion depth of Kristen Stewart from Twilight and the movie banks on audiences already being invested in her relationship with Theo James' Four to bother to develop the relationship. Ansel Elgort continues to be the blandest character in the series, but at least his storyline develops an intriguing aspect of the story. Jeff Daniels is misused here as his antagonist character is one that never gets explained and leads the series to questions that the movie has no problem not answering. The most interesting character in the film is played by Miles Teller as he once again flip flops allegiances at the drop of the hat, but is putting his all into the role-in all its over the top goodness.
Allegiant has some good world building as it gives a glimpse at the world outside of the walls of Chicago and gives a look at the power structure in place in this world, but the abrupt ending leads to the question:Did anything really happen in this film? Maybe viewing this with its second part may bring a more positive look, but for now this film is just another dystopian YA film that is too much like Maze Runner for its own good.
3/10