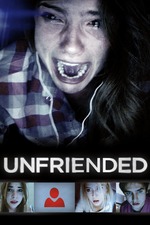 From an email I sent to a mentor of mine:

It's a "desktop" horror film that I think should interest you—not because of its "New Media" techniques but because of how it uses the visual language of the desktop to appeal to the classicist functions of narrative and suspense. There are many elements—rephrasing typing, a cursor spinning over a button, lagging, and notification sounds—that work as social codes that the contemporary audience is familiar with, and then they are exploited in the film to move the narrative into a direct plot with psychological motivation at every moment. I found that last part particularly well played, as just by following the typing or cursor movements, the film gives us direct access to the character's internal emotions within the plot structure without having the need to show her face (except within the Skype moments) or rely on classical editing to create meaning.

I also think the use of the desktop plays with our cognitive screen watching — there are many moments where our eyes our averted to one spot in the screen (a notification on the top right), which allows the director to set something up on the other bottom corner without us necessarily noting the construction happening. There's all the hubbub these days about the possibility of New Media forming some sort of new cinematic style, but what I appreciated especially about this movie was how it used common technology tropes (at least for a younger person like me) to create suspense within a narrative framework that appeals to the classic norms of Hollywood.