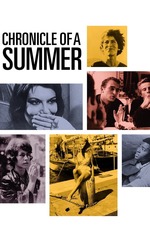 Chronicle of A Summer puts its filmmakers, Jean Rouch and Edgar Morin, as observers who are no doubt also the instigators. They begin filming from the first time they approach the subjects of their documentary, thus noting the participation and thus manipulation from the very beginning. This sort of openness thus qualms a number of issues that would plague spectators if this was a “normal” documentary examining labor issues in France. A long sequence follows one of the workers at a factory home, and one particular climbing of a staircase includes no less than five cuts, which would either mean the climbing was filmed multiple times or (more likely) the subject was asked to wait while the camera could move to a different position (if not be asked to climb back down). The effect of the technique is clear: it makes the stairs seem arduously long, and his own journey much more difficult. And yet because the manipulation of the subject is clear from the beginning and the end, the ethical question of manipulation becomes a null point.

In Cinéma vérité, the subject is always aware of the camera and its presence, which is never meant to “forget” it is there. But at some point, the break in the “performance” is meant to reveal truth, what Morin himself describes as “that which is hidden or repressed comes to the surface in these roles.” Every subject has a different reaction to the camera, most notably Mary Lou, who uses it as a confessional diary about her own intense social anxiety (as well as intense narcissism). She is in many ways a documentarian’s dream: a confessional who seems to bare her entire psychological state for the camera. However, there is the lingering feeling that this is simply a performance she is giving because of the “stage” she currently occupies. This, of course, is what makes Chronicle of A Summer not so much a film about the social inequalities that inhabit Paris in the summer of 1960, but really about the difficult nature of capturing truth. As noted by the final post-screening conversation included at the end of the film, and the different reactions people have to seeing themselves and others they’ve interacted with on screen. But for Morin and Rouch, this problematic is the revelation itself, and not finding accidental moments, but those that are in part necessarily staged, reveal the inner truth about individuals as they present themselves to the camera, and thus the world.