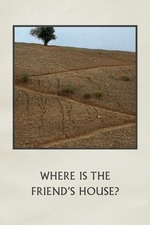 I have a huge soft spot for films that understand the purpose of children in society. Because so often it feels like they are looked at as mirrors of who we once were that we have the ability to mold rather than a part of humanity we could learn from. A few films that immediately come to mind are Truffaut's The 400 Blows and Pialat's L'Enfance nue. While sure, Where Is My Friend's House fits in the same category as those films in a sense that it also features a bunch of shots of a little boy running around in a world full of mystery. But rather than feeling hard to ignore, its as though this boy is a part of the space. A space that, by the way, is captured in probably the most visually satisfying way possible. I mean come on.

This is a very charming, clever, simple, yet dense film with a central message that reminds you how forgotten empathy often is. It really touched me!