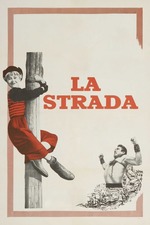 This is truly a distressing tale. La Strada brings together two opposing souls to unfold a story that ultimately displays a better aspect of humanity. La Strada marks Federico Fellini's first fully Felliniesque film, in which his signature energy and boundless narrative are combined with his ability to capture reality and reflect its truth through his dream-like perspective. Fellini's works will continue to reflect his own reality, producing complex combinations of personal influences. Fellini retains many obsessive visual traits that he will continue to repeat in his films: circus, parade, sky and of course the seashore. We easily could pressumed that at that period Fellini would rework the drawings until the end of his life.

The iconic female character, Gelsomina, is the cynosure of the film. With a beyond compare facial expression, it radiates a certain beauty but is also very odd for some to see. La Strada is like a tale set in a circus venue. Gelsomina here is a young woman with all her innocence we can see that she hardly ever gets anything that benefits or makes her happy. One day, Gelsomina was recruited by an impudent and brutal man named Zampano as his partner and wife. Woefully and however, due to Zampano's despicable character, Gelsomina frequently got bad treatment from him. Actually the story itself is unambiguous, but the it’s brilliantly developed as Gelsomina character continues to seek love and understanding of a world she doesn't know, becoming a protected loner while living with her mother and four younger sisters.

The way Fellini developed every character is esteemed. We can feel the death of their souls, but we also want to see and understand more. La Strada is unpredictable and gripping to watch, because it keeps the mind wandering with various scenes packed with symbols and metaphors, beautiful puzzles to decipher. Since Fellini does not present it directly, and rather wraps meaning in layers of symbols, revealing truth becomes fulfilling for the audience. La Strada also points out that human friendship is everything, even when it is built on the foundation of psychological abuse. It seems as if it is something that cannot be denied, that humans are not able to live alone. Conceivably it could survive alone for a certain period of time, but the rest of the life, a soul need need another soul whether in any relationship context to pour out all feelings.

Visually, La Strada is beautiful to see, with some memorable characters, at this point Gelsomina. It is difficult to say if the film has a happy end, but we’re still contented with the story told, particularly the messages taught to the bad-side character, though it is too late for him, and it is uncertain that he learned from the experience. The story may seem manageable, but the main touch of Fellini's heart and vision speaks to us straight through the canvas on Gelsomina's precious face.