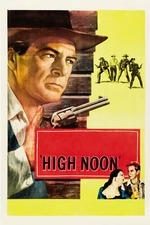 There were the peak of an era in which many epic Westerns were released, set in a desert setting mostly captured the frontier landscapes between North and South America, likewise using hordes of cowboys in action and Indians as complements. High Noon is not much different from those attributes, Fred Zinnemann’s High Noon has the techniques like character-based drama and the tension of Westerns films in general. The director carefully and deliberately takes advantage of the atmosphere of threat and impending violence towards the protagonist. We'll know exactly what to expect from a Western: a tough, confident hero facing down an impractical villain in a climactic gunfight, lots of action, and not much to get in the way of the depth of the action.

The 'Oscar winning' role of Gary Cooper, as the newly married marshal Will Kane, goes to defend himself against his returning enemies, is abandoned by the city that has remained loyal to him, and is played in real time for 90 minutes of running time. Gary Cooper did an amazing job of portraying this heroic character, a man who stands up for his own pride and morality, called upon to do one last duty as a law enforcer even though it is the duty of the townspeople. The plot shows that no one in town is willing to lend a hand, is forced to go against his wife's wishes, and definitely the heroic combat will come in the end: fighting the enemy alone. High Noon is about loyalty and betrayal. Loyalty on Will Kane's side even when everyone abandoned him, he remained steadfast, despite it seemed inevitable that such an act would cost him his life. Many local residents agreed that they owed Kane prosperity, but they would not help him or defend him, as they believed the struggle was hopeless. Many have called High Noon more of a morality drama than Westerns, and, in some ways, that's an accurate description. Apart from the main plot thread, there are a few other issues to consider.

Zinnemann directs the film superbly, makes every scene fit into a bigger scheme, the film is neatly arranged in other words High Noon is a definition of how to set the pace of a film properly and the outcome is Elmo Williams' inventive editing have the perfect tempo. Packed in Black and White, High Noon is among the finest Westerns have ever made. Emotional and moral film with a climax ending.

To Have and Have Not