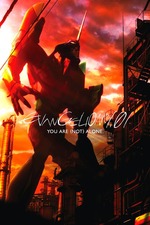 rewatching all the rebuilds bc watching the fourth one made me realize i don't remember shit about any of them.

boy howdy that sure was a shot for shot remake of the first six episodes of neon genesis evangelion! but now with *updated* animation which ranges from drop dead gorgeous most of the time to kinda out of place xbox360 looking 3d animation. given, people probably would have reacted poorly to things being drastically different right from the getgo, so i understand it.

the subtle reveal at the very end that this is, in fact, not going to be just the same exact series from 1997 but with updated animation is a good touch.

i look at this movie as a sort of homecoming for evangelion. a series which cemented itself as an iconic classic, returning to glory after 10 years. but to be completely honest i would much rather just watch episodes 1-6 of the original series than watch this movie.