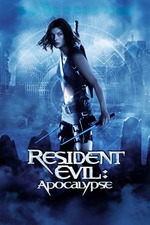 I heard this was a series low point and well, I hope it is. The first film was at least stylish and economically told—this film is inept from the get go and never lets up. Asinine and convoluted in how it attempts to tie elements from Resident Evil 3, as well as, what, six characters too many? Milla is clearly slumming it up and looks displeased to be a part of the sequel. Somehow even worse CGI and a silly, unconvincing Nemesis, who moves like a giant doofus. Anderson clearly didn’t seem to care about the script and I’m sure he says he had a valid excuse for not directing it but the fill in director is as pedestrian as the zombies in the film. Snoop Dogs personal problems seemed worth keeping him away from playing what is supposedly the “comic relief” but is moreso a token black stereotype. Mistakenly watched the EXTENDED cut which should have been renamed ENDLESS cut and it’s still not even two hours. Isn’t the ending of this film essentially retconned in the next? I have a feeling the series is gonna end up like other horror franchises, even if Anderson tried to keep his auteur leash on it. Just lame, brainless, joyless, nonsense.