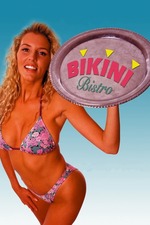 I'm pretty sure at a certain point studios were just throwing darts at a board with words and just pairing whatever they hit with BIKINI.

Bikini Bistro, a down on it's luck...Vegan (?) restaurant on the verge of being destroyed. What will they do? Who will save them!?

Apparently one of the people running the place has an in with Chambers. With her assistance and expertise, Marilyn brings some sex to the restaurant- and the dough!
What follows is a lot of bikinis, slow ugly sex and a glaring reminder of how downright ugly the 90's were. Think Friends level of fashion/set dressing - but worse.

Some lady protests the shop, is foiled, turns friend, then gets a make over. She has the same hair as the villain in Matilda & Mary Woronov in Rock N' Roll High School- Does that hair just automatically make you evil?
In this universe of the film, everyone knows who Marilyn is and loves her. She even gets her own moment of soft core at the very end.

Dumb & ugly, but didn't make me want to die.

**Go listen to Marilyn's song Shame On You from Insatiable, it's a good little pop song. **