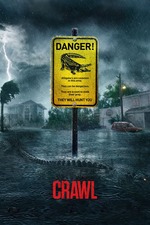 Things I learned while watching Crawl:

- Florida state police officers do not bother pursuing people who directly and brazenly ignore their explicit orders.
- Basements below ground level do not flood until it is narratively necessary for them to do so.
- Alligators are all at least 9 feet long.
- If any alligators smaller than 9 feet long do exist, they most certainly do not venture into basements where their smaller size would enable them to crawl under some pipes and eat the humans sheltering behind them.
- Open tibia fractures can be walked on within hours of said injury with the handy aid of a tightly wound belt.
- Alligators do not possess the bite pressure to render legs useless, as evidenced by a calf wound which is nought but a minor inconvenience for one character.
- Being bitten on the arm by an alligator will not in any way render said limb useless for things like climbing, punching or grappling. (Note: this is only true of major characters).
- Minor characters are able to be completely torn asunder within seconds of entering an alligator's habitat.
- Alligators hunt by noise and splash only. Except when the plot requires them to charge at a light.
- Top level human swimmers can out race several alligators in their natural habitat.
- Losing a limb is only lethal to characters who do not have a recoginsable name in the credits.
- Helicopters can fly through hurricanes with the high speed winds causing them to only slightly wobble.

Listen in for a more detailed feature review dropping July 20th on The Countdown: Movie and TV Reviews podcast.

Find the podcast here or check it out directly on iTunes.