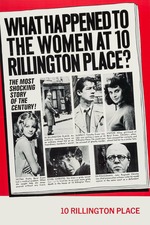 A truly horrible film, but in the most complimentary sense of the word, 10 Rillington Place is a contender for being one of the grimmest serial killer stories ever put to film, director Richard Fleischer portraying the true life murders committed by John Christie ​with almost documentary-like detachment, avoiding any temptation for sensationalism and sticking strictly to the facts rather than speculating on ambiguous motivations or focusing to much on the psychology of the character. Rarely is evil portrayed with such banality and it's this matter-of-factness that gives the film its deeply disturbing power, Richard Attenborough's performance sees him disappear into the role and plumb the depths of darkness to the extent that he found it difficult to go home his family after a day of being this man and it's easy to see why.

The gloom and devastation of post-war London is a constant presence, the depressing and cramped tenement buildings only adding to the sense of loss and oppression—it's the perfect milieu for the timid but clearly deranged Christie to inhabit and as always, Fleischer knows what is best for the material, here he exerts almost no showy camerawork and simply lets the outstanding performances from Attenborough, Judy Geeson and John Hurt do the work. The case was also notable for its miscarriage of justice, whereby Timothy Evans (Hurt) was wrongly hanged and the film puts forward a damning indictment of capital punishment, which thankfully has now been abolished here in the UK for over twenty years. Evidently we learnt our lesson the hard way.