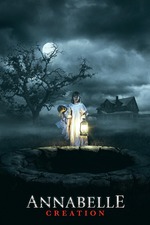 Had a nice discussion about this with dad on the way home. He really enjoyed it because it's the same entertaining flick that makes sense for Hollywood to make, while I kept arguing how I'd rather watch an interesting idea with mediocre execution > the same idea with mediocre execution. He mostly disagreed because I like The Witch and he found that boring, but we both ended up agreeing that Hollywood has it all planned out well. Even if most audience members hated the first Annabelle film, they will willingly give money to the study for a sequel because it's part of the Conjuring universe.

Also, remind me to only watch horror movies in a theater opening day if it's one of these blockbuster horror ones, because I wouldn't want this kind of audience for Mother! (which I'm so excited to watch, too). Every single teenager, making jokes, screaming, shushing each other, and hell, there was a 40 something year old woman who stood up and told them to shut the hell up! Though she came off ridiculous instead of a life saver, because really, that's what this film is designed for. Teens go to these to scream and have fun; there's not much in its story or characters for you to be so invested on.

Anyway, this was really lame, not creepy at all, but instead unintentionally funny and sometimes intentionally funny (right?!). Some cool moments; for example, girl throws a ball at the doll's face, cut to girl, cut back and the doll is looking straight at her. Not creepy, just cool looking. I was never bored, but I was never interested in what was going on nor was anything the least bit surprising. After the set up, it feels like a constant loop of a girl in a spooky area, and things slowly happen around her before the predictable jumpscare. Oh no, the door closed and now there's a lot of silence, I wonder what'll come next.

Best I can say about Annabelle: Creation is that it looks good and is entertaining through most of it. Yes, I say most, because once they continue to loop us through the same scenes we've seen many times before, it gets a little unbearable. Throughout the whole film I was begging for them to give me a new idea or form a structure to a scene, but nope, that would be different from our formula that gets us lots of money. Considering that you already have a fandom and they'll obviously go watch your shitty movie anyway (myself included), then is it now time to make something new in the Conjuring universe, confident that it'll make money? No? Okay, can't wait for The Nun.