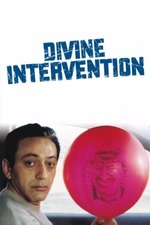 Palestinian life under Israeli occupation as a series of dark-edged absurdities, Suleiman’s distinctive melancholy slapstick a way of drolly laughing to keep from crying. The film is at its best, and its funniest, when exploring Nazareth’s inhabitants as living on the verge of some kind of collective breakdown; the promise and constant deferment of the two-state solution metonymically reduced to neighbors endlessly throwing the same trash into one another’s yards. The bittersweet spell’s broken, though, when Suleiman reaches for a bit of magical-realist wish fulfillment; the image of his mysterious lover used as target practice by Israeli soldiers, before she transforms into a balletic, bullet-deflecting ninja. It’s like a parody of an already self-parodying John Woo sequence. “That’s enough. Stop it now.” For most of its running time, the film beautifully captures everyday life under occupation as feeling like patiently watching a pressure cooker about to explode; so it’s a bit unfortunate that it ends with Suleiman and his mother patiently watching a pressure cooker about to explode.