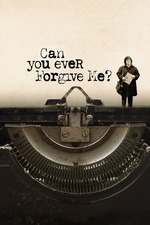 Genuinely pleased at this film, thought Mellisa McCarthy un-typecasted herself away from the kinds of characters that we're used to her playing all of the time. Lee Israel is shown as an unlikeable woman, but one with multiple sides and occasional good qualities and warmth (i.e. a human being).

Films set in the early 90s don't easily disappoint me visually, but 'Can You Ever Forgive Me' didn't seem to rely on its aesthetic and manages to become a film with tension, well timed humour and an acute understanding of deep isolation and loneliness.

...On reflection, the fact that the script only engaged with the AIDS crisis via Grant's character's euphemisms of his sickness, felt underdone and cowardly, considering the huge impact it had on New York's creative scene during the 80s/90s. Could try harder.