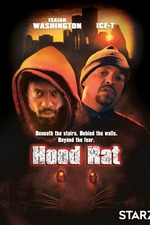 I was in the mood for a bad movie so I figured I might watch Hood Rat; a dollar dvd which I've been putting off watching for a year or so. Call it The Super meets Willard in the hood. Hood Rat's story is about a slumlord who is court ordered to live in his dilapidated building. Meanwhile a guy living in the buildings basement(Isaiah Washington) befriends a rat which he frees from a trap, names Tara, and holds one sided conversations with. The rat apparently feels sorry for him as he's always messed with by different ghetto residents, brings him food (gross!!!!), & eventually brings rodent reinforcements. After the death of Washington's brother due to the negligence of the buildings owner & and his eviction (even though he was paying rent for the basement he's put out in the cold) he snaps & commands his new friends and unleashes his furry fury on the slumlord, his thuggish rent collector (Ice-T) & the tenants who have wronged him.

Super cheesy, low budget chock full bad camera effects, laughably bad dialogue, very little blood, & very many live rats swarming around bodies. By no means a good movie but I definitely had a few laughs at this so-bad-its-good flick that I'm sure Ice-T and Isaiah Washington are ashamed to have in their filmography. Hood Rat is all about the cheese.

Johnny B. is using Letterboxd to share film reviews and lists with friends. Join here.