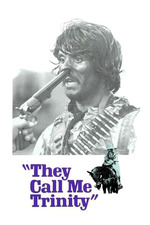 This has the weight and direction of the start of Once Upon Time in the West. Terence Hill opens with wordless Chaplin like performance. Not after a Django style character setup and theme tune. Hill kinda started his Spaghetti Western career as the guy who kinda looked like Franco Nero in a Civil War Union uniform in Django cash in, Prepare a Coffin. But They Call Me Trinity would change his career and the genre.

3 body slams and a castration by gunshot up through a balcony. This even ends in a huge drawn out punch up on the plains instead of the regular shoot-out in town. Slapstick fighting and magic trick lighting fast pistols draws from holsters to confuse the bad guys. When there is a gunshot fatality its by Joe Trinity (Hill) who has left an instigation in a bar and then shot two outlaws across a street shooting throu a window backwards. Terence Hill and Bub Spencer chemistry is evident from the start here they play brothers in Trinity. Would go on to have a buddy movie career that would span 25 years. Collizzi's 'God Forgives... I Don't!' in 1967 was the first time they were put together but Trinity was the real start of something with a comedy feel.

By the end of the decade the Spaghetti Western genre was at a crossroads. We really are far, far away from the town Joe rode into in Fistful of Dollars. By 1970 the cynicism was lifting, there is a emphasis on lighter parody style and the comedy was coming in. This odd fusion of Chaplin/Pedrolino (Peter) into Spaghetti Westerns, has more to do with Italians continuing obsession with the 'Wise Fool.' How revered Charlie Chaplin films where in Italy. Chaplin was basically giving something back that they embraced through Pedrolino Roman / Greco.

But this wasn't new to Italo Westerns. Elli Wallach's Tuco in Good the Bad and the Ugly was that first example of this almost wordless clown-like performance in this genre. The gunshop scene when he appears out of the desert its a Pedrolino mime.

Bud and Hill would return to these characters the following year. Hill would settle into this Pedrolino character for the next few years. Even to the point that Sergio Leone was taking notes. Thomas Milan would take this a step further by creating an actual Western Chaplin character for Life Is Tough, Eh Providence? Comedy Spaghetti Westerns had arrived. Mainly because Trinity was huge... and the Italians follow a hit.. and like Fistful of 'Dollars' and 'Django' to the point that a lot of films would cash in on would use the 'Trinity' word.