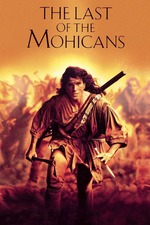 Alice & Uncas had me a mess, like it always does. Nobody puts music to film like him. This was the first I’d read about the research and details Mann put into his films. Even here Mann is painting Wes Studi’s Magua, being momentarily shook by Alice’s choice. Like the Tooth Fairy’s dilemmas in his previous film, Manhunter. This detail is what makes it truly great.

People forget how huge Mohicans was in 92’ It was this massive eye candy hit with the older sisters and Mums. Very quiet living rooms. Grunge hair action hunks in the slow mo. Not really paying attention to the bigger picture. Fast forwarding past the bone crunches. Watching the shit out of the waterfall departure. Eric Schweig in soft lighting.

Amazing how Barry Lyndon some of early framed shots look in the British camp but with a bit lot more urgency of a summer ten pole film of 1992. But then so did Manhunter in the beach scenes. But possibly more lifting from Clockwork Orange.

This was the 1992 Theatrical Cut. Kinda prefer it to Mann’s late 90s Dir Cut.