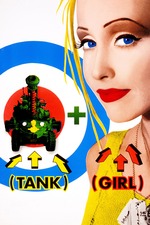 1995 wasn’t a good year in British Comic stores. We’d already witnessed most of our talent being poached by the US in the late 80s, for what turned out to be the a lot of empty promises. By mid 90s American mainstream comics where dying on their arses. Indies were the new frontier.

I’m not sure what came first this or Judge Dredd from Hollywood. A lot of mistrust of things being sold back to us. Nobody would give either of them chance in the U.K. Post-Grunge you had a lot of anti-US sentiment culturally. Trainspotting was a couple months away making this look extremely creaky.

Both cases the production value was spot on... this beating Dredd. Both the casting, writing and the intent / interference was wrong.

Tank Girl finished as publication in the same year. 2000AD survived the late 90s in a forgotten period by becoming Loaded magazine for 12 year olds.