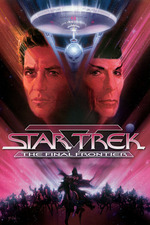 It's a Trek I use to watch a lot as kid with Search for Spock. But this was a rough watch. Two stars and they go in the first 20 mins.

★ - I still stand by the El Capitan sequence as wonderful opening. It harks back to previous film, just these characters interacting with some heavy reflection on earth. The George Mallory quote, the stunt work by Bob Gaines is possibly the best depiction of free solo climbing in a film. Still think it ignited something in young mind of Alex Honnold - Free Solo/ El Capitan fame. The guy grew up a shut in and even looks like Spock. He'd be watching the video tape three times in a weekend like the rest of us in the early 90s.
★ - Goldsmith's music that accompanies that ascend is one of the greatest pieces of music I've ever heard in a Trek film.

Once this film gets into orbit is when it starts to slide off. A dull film, oh god.. more than I remember it being. 'What does this crew need with starship?' should of been the bigger question. On better memory, I once also witness my old man almost dyin' of laugher, at Scotty knocking himself out on that bulk head.