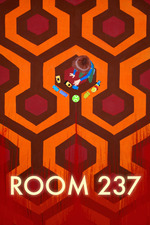 10% of this is interesting. On film subtext allegory level. The rest is a feedback loop of how Kubrick rapped his worlds in richness and how he would play games of disorientation. How the shot of the twins is slightly out of focus drawing eyes in and away to other things on the outside. Ultimately all his films play these games... Maybe The Shinning is far more rewatchable and flawed process in this aspect. Because it’s genre horror.

Always found the ‘impossible room’ theory fascinating. Now there’s a line where Kubrick's games of disorientation end and being the victim of a complicated film production with bad continuity. Specially when you look at how chaotic, cluttered and claustrophobic Vivian Kubrick's making of a the film. Out of shot somebody on production lifting a Disney Dopey Dwarf sticker for their kid back home.

Ultimately... This film is that tedious ’Moon Landings’ guy who traps you in the kitchen at a house party talks to you for the same running time as this film. That everyone else didn’t warn you about.