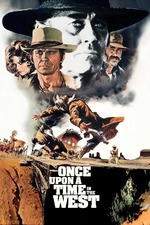 "You don't understand, Jill. People like that have something inside... something to do with death." - Cheyenne

The greatest opening 30mins I've ever witnessed, all the way up to the crane shot with Jill leaving the station... and then it keeps going, scene after scene: The McBain massacre, Jill's look of despair on the bed, Morton and the Pacific Ocean, the horse tracking shot next to the train, the super close up of Harmonica's sun cracked face and the way Frank swings around from the recoil fire in the duel. Yet again I don't want to talk too much about this one, best not to take things apart.

Interesting thing about watching this in sort of genre chronological order, is the amount of Spaghetti Western usuals you noticed tucked away in the gangs of Cheyenne and Frank. Interesting when most of them have gone on to bigger roles with other directors between 1965-68. Leone puts them all right back in silent intimidation of Ramon/Indio's gang where he found them. The rumour has it that Leone toyed with the idea of Eastwood, Van Cleef and Wallach meeting Harmonica from the train. Working like a hand over from the last three films. Eastwood being the only one who couldn't make it.

The film is an astonishing showcase of Carlo Simi production design. More than any other film he did with Sergio Leone or anybody else. When you give that man some good 1960's Paramount money. Everything from that ankle breaking train platform, ramshakle water outpost in the shadow of Monument Valley and The rustic brick work on the saloon interior. It's a huge character in this film that gets over looked.

This is Leone house style at its pinnacle. Morricone and Simi as well. The Dollars films were a warm up for this. I still think A Few Dollars More is a better film though. Strange when Leone had his heart set on a American Jewish gangster saga after The Good the Bad and the Ugly. American money wanted another western. It's going to be odd to return to his contemporaries after this for 1969. The twilight of the boom period for Italian Westerns.

Once Upon a Time in the West is the end of a myth. the train bringing modernity to the wild west. But it had effect on industry... Spaghetti Westerns mostly retreated away from the Fistful of Dollars model and much further into Mexican Revolution (Zapata Western) territory. But also a Chaplinesque approach: humour and melancholy. Later you find in heaps in Once Upon a Time in the West and a very Italian thing to do.