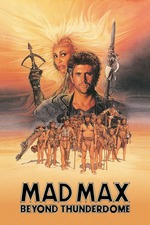 Have a lot time for this one.. More than most. Things get more and more tribal and medieval as the modern world disappears under the sand.

Tonally it’s three films. With its two directors. Miller was preoccupied with the death of his producer and companion (in helicopter crash scouting locations) on this journey, Byron Kennedy.

But the two sensibilities work well. That 80s cult of ‘the kids’ is here, better than Temple of Doom or Goonies. There is something interesting in this never rescued Lord of the Flies making sense of the world. The story told with a 16:9 wooden view finder and the french linguist record.
Never thought about this before but the 3rd act is not trying to ‘better’ the Mad Max 2 chase that people see as failure… it’s a parody of it. Like how Evil Dead 2 works.
All these three parts are very strong in their own right. Not sure how they stitch up specially the return to Bartertown. Another 80s film that looks like it missing 20mins to sell more popcorn possibly?

If Mad Max 2 is Seven Samurai.. Thunderdome is straight Andrei Tarkovsky in it’s flashes of beautiful surrealism. It’s a beautiful opulent mess, like Lynch’s DUNE two years prior. The Art direction is astonishing. This is Miller crystallizing this idea of: just because the world has crumbled, people will always make beauty out of the debris around them. Would go on to be fully realized or maybe just really reminded 30 years later.