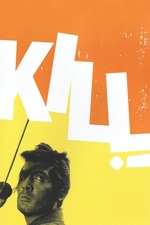 Kihachi Okamoto and Masaru Sato were the first to bring this '*Macaroni Western' sensibility back to a Toho production. Bringing it full circle. Sato's title theme from the get go could of been lifted out any Spaghetti Western over last two years prior.. Our opening town is pure fusion of Yojimbo and the ghost town Franco Nero enters in Corbucci's Django. Broken town looks like a bored **Daimajin picked it up, rung it out like a tenugui cloth and slammed it back down into dust.

It's dark humoured like the films it taking energy from. It's got several amazing swordplay sequences. It's the funniest thing ever made with Samurai in it... No, really it is. Almost feels like a cathartic process after all the bleakness that was Okamoto's previous Chanbara Sword of Doom. Like Sword of Doom it's got another amazing Tatsuya Nakadai performance in it. His best? It's up there with Goyokin for me, and with Etsushi Takahashi the figure that opens the film aping the start of Yojimbo. They make this amazing double act bouncing off each other. It's huge unexpected celebration of the genre. When people go on about how funny ***Sanjuro is... this is faster and funnier.

So its sorter a remix of Yojimbo/Sanjuro with the more defined motifs of Spaghetti Westerns. Mountain cabins getting shot up in a ambush, putting lots of Portuguese flintlock gunpowder smoke into the air. There's some great slapstick scenes around Ronin getting steamin' drunk in a brothel and pulling a stupid macho stunts... a Farmer who wants to be Samurai.. and Yakuza that has the reflexes of one, and all centred around a group of samurai (there's seven) who have been framed, and are about to be wiped out.

There's this constant subversion of the way these films should roll, cynical lone hero tries to walk away from resolution but gets pulled back into the party, something refreshing about it. Do think its concious move by Okamoto to bring the light into this genre. Or at least poke fun at it a little. There’s also a star performances from a cat after Official's fish supper and turkey. What else could you ask for. So it’s greatest hits of Samurai films and it should be a lot bigger than it is!

*** Sanjuro and Kill! screenplays are both based on the same book.