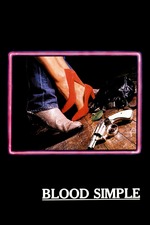 There's something very pure about Blood Simple its the distilled sensibility of a Coen Brothers film. The story has been redone bigger and bolder in the form of Fargo*. But this is one I go to every time. Visually it has more in-common with 80s horror with its backlit smoke and haunted furnaces than Raymond Chandler. Lots of M Emmet Walsh, lots! So much I love about this film. The Brothers had previously worked as crew on Raimi's Evil Dead which I suspect rubbed off on them slightly; taking the POV cam and the sense of re-animation into this desert noir thriller.

*There is a scene in Blood Simple and Fargo. A body on a empty country road at night with a vehicle lights in the distance baring down with different outcomes for the protagonist. Also Carter Burwell's playful soundtrack turns cars into characters in both films.