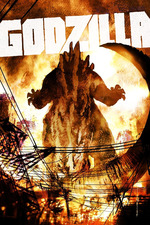 Whilst Akira Kurosawa was off changing the language of action cinema with Seven Samurai, his close friend and future collaborator, Ishirō Honda, was arguably transforming how we watch films, just as much.

Godzilla is where it all starts. Not just the longest running, and one of the biggest box-office franchises of all time, but you could make the case for modern monster movies. In fact, I don't think it's up for debate.

Kong obviously came first, but that will always be a romantic drama at its heart, not an apocalyptic action thriller. Godzilla sets the template, and you can see echoes throughout all the great monster movies that followed in its wake - Spielberg owes so much to the way the film is shot (more on that in a minute), and it's of course fitting that Roland Emmerich attempted to remake the film - he owes a good portion of his career to the burning cityscapes of this film.

It is of course dated in the effects department, but the reason I think this character still lives on today, is in how inventive and restrained it is with showcasing the monster. Shots like the first proper reveal, behind the hill, or those shots that Gareth Edwards attempted to pay homage to in 2014 - just the feet pounding into the ground. This creativity is what lives on in the movie.

The other aspect of course is in the story. It explores a number of topics that unfortunately still remain relevant today. Everyone knows about the nuclear references, but I wasn't aware of the subplot about the Oxygen Destroyer, which is just as significant a commentary on destructive power in the wrong hands. Chuck in the superb Takashi Shimura as the professor who wants to study and not kill, there's a lot to chew on in a "monster movie".

Leaving everything wide open at the end also turned out to be a masterstroke, as Godzilla went on to dominate blockbuster cinema right to this day.

I'm fairly confident not a single sequel will compare to this... But I'm happy to find out!