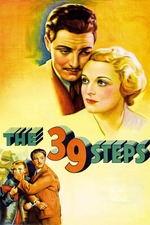 “I used to wake up in the middle of the night screaming, thinking the police were after me. But one gets hardened.”

A near-perfect snapdoodle of creamy greys and point collars, the kind of film where the star looks better poaching a haddock than you’ll ever look in a lifetime of your best moments. Hitchcock here seems a vanguardist of modern surveillance delirium, of innermost paranoia gone public—cops at train stations, cops crawling the Highlands, cops, cops, cops (and a comic menace of an autogyro.) Filmmakers have ripped it off for 80 years, whether they know it or not, but they usually get the hymn’s words but not its music: the piss-taking of God and politics, the whirl of push-pulls and forced perspective, the seamless cuts from soundstage and back projection to exteriors, one tumbling dazzlement after another. They don’t pull off the stocking kink or the spit-shine banter, nor do they often spare time for tonal variance, to make place for Peggy Ashcroft’s downcast, no-future eyes, as well as the goods-delivering but vaguely unsettling frisson of the last shot, of matchmaking and impending marriage as a pair of handcuffs. What a marvelous film.