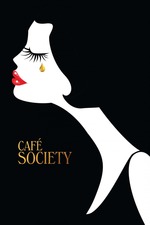 A beautifully sad film that is bathed in a golden glow. As it moves toward a note-perfect expression of melancholy in its final act, it firmly reminds me that Woody Allen directed Manhattan, the best film ever to wrestle with its brand of romantic disappointment. What elevates Café Society as an artistic statement (in some respects even beyond that classic) is its assertion that there is a kinship between Allen’s frequent laments about life in a Godless world and the lapses of faith that lead to regret in personal relationships. The note of desperation that concludes the film catches you off-guard, yet it is a deepening of the neurotic concerns that preceded it. Religion is a crutch and a coping mechanism, but connection with another person can be as well. Without either, there’s little to distract one from the void. Much like this year’s Hail, Caesar!, this is a deeply philosophical film that peeks behind the Hollywood dream factory in its attempts to question why we create beliefs and what happens to the soul when they don’t take. Of course, this contemplation comes in the guise of a comic romance, and that Café Society is by and large a light film, not burdened by weighty concerns, belies its true intent. It’s a testament to Allen’s skill that he makes what could be ponderous seem so effortless.