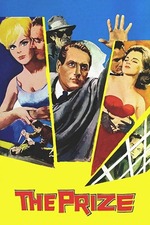 First off, and MOST IMPORTANTLY, this movie has a scene in which Paul Newman in his prime wanders into a nudist meeting and then is literally forced to take his clothes off by two burly men and I believe in God now so, that's worth an extra eight stars, right??????????????

For a movie that starts out slow and meandering, this shaped up to be quite a fun caper film. Paul Newman's doing some sort of hybrid impersonation of Marlon Brando and Jack Kerouac as the shithead writer who wins a nobel prize in literature. He reveals that even though he hasn't written for the past four years, he's been making booze money publishing detective novels on the side. Of course meanwhile he discovers a bizarre but intriguing Cold War plot to forcibly smuggle a German defector scientist back into the Fatherland.

I waited this entire movie for somebody on the Nobel committee to admit that the reason they brought Andrew Craig in for this prize was PARTIALLY because they had some inkling of trouble and thought he could help with his amateur detective-chops but it never comes up. ALAS. Either way, I liked this mix of Hitchcockian gas lighting ('the dude's a drunk anyhow, who'd believe him!') and noir nods. I liked that Elke Sommer spends the first half of the movie rebuffing Newman hardcore to the point you're actually like "yeah, girl! You don't need that hottie!!" but of course she's only human and he's Paul Newman so eventually the two characters have an unbelievable and yet cobbled together love story.

About a half hour too long, and way more fun when it's not taking itself so seriously, The Prize aint gonna win any originality prizes but it's a genuinely enjoyable watch. It's witty, it's quick (when it gets going), and it's not afraid to flirt with the ridiculous. Newman felt kind of inconsistent in his initial impersonation-esque smugness, which eventually melts into a more Cary Grant type baffled straight-man, but I had fun so I ain't gonna complain.

Won't You Be My Neighbor?