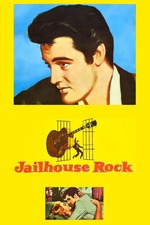 Woah, okay, Elvis just got real. This is like the mirrorverse version of Loving You—no really, it came out the same year. It’s a much darker origin story for Elvis that gets surprisingly violent considering it’s mostly an excuse to showcase pop music.

Elvis plays Vince Everett, a hotheaded young man who has major anger issues that ends up beating a guy to death with his bare hands because he didn’t like how the guy was treating some random chick. While in the slammer, Vince gets a bad buzzcut that somehow makes him look five years younger and learns how to play guitar from his ex-country musician cellmate. Realizing how much it pays, Vince decides to pursue a career in music once he gets out of jail. With the help of an eager promoter (Judy Tyler)– and after breaking a guitar over a table and slapping a record executive in the face– Vince finally makes it big. However, it’s lonely at the top when you’re kind of a douche with a big chip on your shoulder.

Jailhouse Rock is seriously dark! Goodbye good-guy Elvis—now he’s straight up lecherous and vindictive, with uncontrollable bursts of anger. I kind of wish this went even darker though, like maybe throw Robert Mitchum in there as the other prisoner, or have Scorsese travel back in time and direct. But as is, there ain’t no sunshine in Jailhouse Rock—Elvis kills a guy, punches a cop, shits on Jazz music, uses words like ‘hell’ and ‘sexy’, and is, gasp, in the same bed as a lady in the ’50s! It also takes until Elvis gets literally punched in the throat and given a tracheostomy for him to reconsider some of the choices he’s made in life—I’m tellin’ ya, this is intense shit.

What’s sort of interesting about this movie is how Elvis’ music doesn’t seem like the focus. Whereas with the last two you were basically holding your breath until he sang again, with Jailhouse Rock you genuinely get into the anti-hero vibe. I was struck by the fact that after Vince is put on national television for a sort of prison talent show (P.S., can we bring this back to television? That’s reality TV gold) he’s shown receiving hundreds of fan letters from women that are just straight up like ‘Hey, I saw you in prison, here are my measurements, let’s meet up when you’re done with the whole jail thing.’ I know that happens in real life occasionally, but dang, teenage girls—you can do better.

Also, this is now the second movie in which Elvis is discovered by a woman who immediately makes it her job to promote him. I’m gonna keep tabs on that. There’s definitely an “older” woman taking care of Elvis theme in these films.

All in all, Jailhouse Rock is enjoyable, well-paced, and made Elvis seem like a terrible person. Though you do get to see him work hard labor without his shirt on, take a lady on a date to watch drag racing, eat a burger, and dance in a now iconic jailhouse outfit, so it’s definitely the most Elvis-y Elvis movie so far.

Best song: It’s gotta be “Jailhouse Rock” staged as a big elaborate made-for-TV performance in which Elvis tries his best to coordinate his dancing and lip-syncing and doesn’t really succeed. This scene is apparently known as Elvis’ greatest moment on film, but I don’t know, it’s not that impressive honestly. Elvis looks like he’s making it up as he goes and everybody else is just following him. The movie covers for it by having a character say at the end, “Let’s re-shoot, some dancers were out of sync”, and whether or not that line was always in there, or added after the fact because the performance was sub-par, it’s telling. The imagery is iconic and the song is great, I’ll give you that.