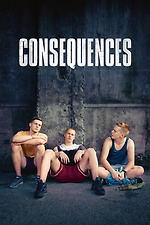 "He wants to measure up to them."

It's hard not to view Darko Stante's CONSEQUENCES, a film of hard, ripped flesh, heightened homoeroticism and hyper-violence, through the prism of the 'chav' or 'scally' fetish that is so prevalent in the gay community, though that's not necessarily a criticism of it, nor is it entirely Stante's fault. His film treads a very fine line between gritty realism, in the manner of something like STARRED UP, and wish fulfilment (partly in the vein of PornHub's most viewed section...), resulting in an improbable but alluring film that is less than the sum of its parts but is still powerful and authentically arousing.

The standout star here is Matej Zemljic who plays Andrej, a deliquent young man who is sent to a centre for youths who have fallen through society's cracks. Coming to terms with a burgeoning crush on Zele, one of the other inmates who is happy to exploit Andrej's conflicted sexuality for his own gain, Zemljic plays Andrej with a ferocious, brooding intensity that makes him believable, even if the scenario in which he finds himself lacks some of that same authenticity. As such, it's hard not to feel for him when his mistakes start to catch up with him.

Furthermore, the manner in which Stante builds the sexual tension between Andrej and Zele feels genuine, and Andrej's struggles not just with his sexuality but also with his life at the centre and his desire to fit in, are quite devastating. The film's narrative mirrors what we see in the lives of so many teenage boys and young men, particularly boys in certain demographics who know that the mantra that "it gets better" is a cruel falsehood that doesn't apply to them because other circumstances get in the way.

Where the film falters somewhat is in its rather generic storytelling. At no point, save perhaps for the very end, does Stante deliver any surprises, though he tells this generic story with enough passion and verve that it's still a worthwhile, if sometimes difficult and frustrating, watch. The performances are decent and there is an intriguing contrast between the sexual tension, which titillates the audience into a false sense of security (albeit with a few too many nods and winks and not enough actual sex), and the aggressive masculinity which drives the core of the film. I just wish it had all been a little less generic.

The Vast of Night