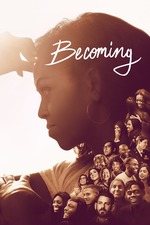 "I am becoming a strong, confident, fierce girl and I realise I have the power to change the world."

A risk-averse look at the life of an extraordinary woman, BECOMING eschews the opportunity to make a mark and say something truly pertinent about post-Obama America, primarily because the individual it is about was also heavily involved in both its production and distribution. Nonetheless, it still succeeds on some level thanks to its message of hope and its focus on the people Michelle Obama continues to inspire today.

As an annexe to her 2018-19 book tour, BECOMING doesn't tell us much that we didn't already know about America's first black First Lady. We all know that she is a successful, intelligent and confident woman who remains one of the most popular people of her generation, and the film is at pains to remind us of this on a regular basis. What the film does well, however, is begin to look at how Obama's life, experiences and beliefs have helped to inspire a new generation, and offers an insight into her relationships with others and her feelings about the highs and lows of her time in the White House.

With the exception of Hillary Clinton, it's hard to think of a First Lady who has been so central to her husband's success, or one as vilified and despised by certain ugly corners of the electorate and the media. Unlike Clinton, however, Obama portrays herself as an apolitical individual. Sure, she has liberal (perhaps even progressive) values but she doesn't appear to seek elected office of her own, nor does she view everything in the shadow of the American two party system, and as such her reflections on life as a somewhat reluctant political figure seem more genuine and rounded than you might expect from someone as stage-managed and closely protected as a former First Lady.

Furthermore, while the documentary never strays into any controversial territory (which is a shame, because it is at odds with Obama's stated desire to be her own person with her own voice) it does offer a nevertheless valuable look at Obama's beliefs, ideals and hopes, and does so primarily through the prism of younger people who feel inspired by her and older people who never thought they'd live to see a black family in the White House. The scenes of her interacting with young black women are genuinely quite uplifting, and although it's misleading and foolish to pretend that one woman's experience can help open the door for millions more to also flourish, the film does a decent job of at least making you think that this is the case.

As with all documentaries of its type, BECOMING is too hagiographic and safe. However, if you expect that going in then it's hard not to be swept up in the message of hope that Obama continues to share and genuinely believe in, even to this day. Her positive, authentic interactions with young women of colour and the film's unashamed embrace of diversity should be uplifting to even the most jaded of cynics, and for that alone it's a worthwhile watch, albeit one that doesn't challenge either its subject or its viewers in a particularly meaningful way.