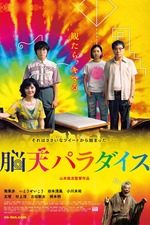 Wonderful Paradise is dumb as hell and completely ridiculous, but I would be lying if I said it didn't make me laugh. When teenager Akane's family loses their home due to her father's poor financial decisions, she takes to Twitter and sends out an invitation to one last party as a farewell to the house before they move. Word spreads and a variety of strangers begin showing up one after another as the party grows out of control and takes over the whole Sasaya household. Things kick off relatively slowly at first as the increasingly eccentric guests slowly trickle in, but by the halfway point when things are in full swing the party goes off the rails and pretty much devolves into a series of loosely related, increasingly surreal and detached from reality skits with kaiju battles, ghostly hauntings, talking cats, random musical numbers, and an ever increasing body count. At that point you have to be willing to just turn off your brain and go along with the absurdity of it all.