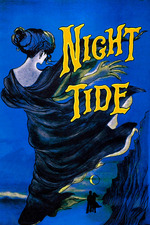 Night Tide is a quiet psychological horror film that relies more on suggestion than anything else. Harrington was very clearly influenced by Val Lewton's horror films, particularly Cat People. Like Lewton's horror films, Night Tide spends a lot of time building the characters and the atmosphere, with the horror culminating in a small handful of scenes. These scenes are where the film really shines; Harrington uses camera moves and lighting in creative ways that are a thrill to behold.

However, whereas Lewton's films were always airtight, usually clocking in at around 70 minutes, Night Tide meanders a bit too much; the opening Jazz club scene, in particular, could've easily had a couple of minutes shaved off. Also, Dennis Hopper's relationship with the leading lady is pretty forced, and the ending is both underwhelming and silly, with Harrington having to use a huge exposition dump to try to salvage it.

Night Tide is an interesting little horror film that's worth a watch for its atmosphere and handful of spooky scenes, but the romance that so much of the film is centered around is bland and unconvincing, and the film falls apart at the end. 6/10 (I nearly gave it a 5/10, but I ultimately went with a 6/10 because of Harrington's impressive cinematography).